Counties of Wales - Vale of Glamorgan

269,498 Vale of Glamorgan Diaspora around the world 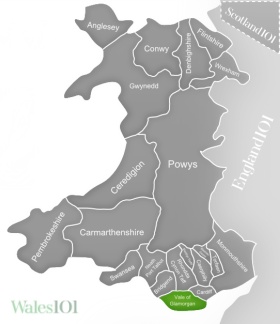 The Vale of Glamorgan is just a short ride away from Cardiff, and is often quite a popular destination for people who would like to get away from the city of a weekend. While the Vale (as it's often called by locals) offers just a nice a landscape as other parts of Wales, the main drawing point for visitors is the medieval aspect, as you can learn a lot about medieval Wales in this region. You can visit plenty of castles, new and old, and even see how life in a medieval village worked. People who would like to combine some picturesque walks with medieval history would enjoy a visit to the Vale of Glamorgan a lot. It is also a very popular destination for Dr. Who and Merlin fans.

The area is also home to the Barry Island pleasure park. This park is famous for its role in the BBC sitcom Gavin & Stacey. Unfortunately, the pleasure park has gone through some very tough time and has been closed in September 2014, so it currently is not possible to go inside. The future of the park is unknown, but fans of the series can still stroll around the area, and/or visit some of the other parks in the area.

If you like Edwardian gardens – or just gardens in general -, then a visit to the Dryffryn Gardens should be on your list while you are in the Vale of Glamorgan. The gardens stretch over 55 acres and show you how garden design works on small as well as on big scales. Of course the gardens also include the obligatory glasshouse and an arboretum. The house that overlooks the gardens, has been partially restored, but is not furnished. From the outside it looks nice enough!

This castle is close to Cowbridge, one of the bigger towns in the Vale of Glamorgan. This castle is quite popular because it has been used during the filming of the famous TV series Dr. Who. You'll usually see some fans going around there, taking photos. Sometimes you might even come across people who are dressed up as characters from the show. They are usually on a Dr. Who sightseeing tour because many locations in the Vale have been used for Dr. Who. Much of the castle is in ruins, but the gatehouse and porch still stand tall, and are nice to look at.

The Cosmeston Medieval Village is great place to go to, and it is a rather unique place, too. It is another location that has a history as a filming location, not for Dr. Who but for the TV series Merlin. The village looks so authentic that little had to be done to turn it into a set for the series based in medieval times. Of course, that also means you might run into Merlin fans there. You can walk through the village on your own or take part in one of the guided tours (your guide will be costumed). The village was only discovered in 1978, but of course it was only the remains of a long gone community. However, a restoration project was started, and the result is the authentic medieval village you can visit today. The village is based on what life would have been like around the year 1350.

People actually still live in this castle, and it is one of the few castles that only changed hands a few times (and you know how often castles usually changed hands in the past with all the different kings and queens!). Between April and September there are guided tours for visitors. As this is a family home, the guided tours are the only option to go inside.

A certain stretch of the Glamorgan coastline was awarded the heritage coast status in 1972. The stretch is around 14 miles long, and it is special because of its spectacular rock formations, the plentiful wildlife, the romantic coves, and the sand dunes. There is also a heritage centre that you can visit to learn more about that particular stretch of coast. Average walkers should not have a problem with walking the whole stretch in a day.

The Nash Point Lighthouse is worth a mention (and visit) because it was the last lighthouse in Wales to be manned. It also is in quite a beautiful area. It is now operated automatically. If you are interested, you can take part in a guided tour of the lighthouse. It usually takes around an hour, and tells you not only about the lighthouse but also about the history of the area.

There are indeed plenty of castles in the Vale of Glamorgan. Ogmore Castle is another one you should put on your list. It is located next to a river, and depending on the weather, you can take some incredible photos of the reflection of the ruins on the water of the river. There are also stepping stones that you can use to walk over the river – be careful though, so you don't fall in! And watch the tides, as the river is influenced by them, and sometimes the stepping stones will be covered in water during high tide!

Top 2 Surnames from Vale of Glamorgan