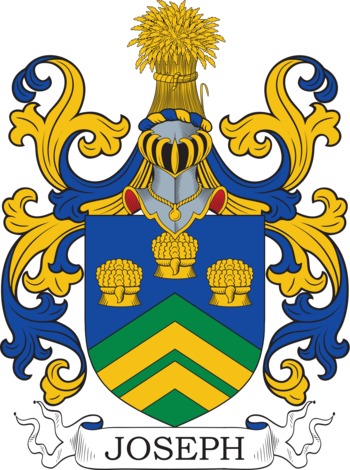 Design your own Joseph Family Crest

This is a surname derived from one of the most prominent Biblical personal names, Joseph, which means 'he increases' or 'he adds'.

It became popular as a personal name during the medieval period after the return of crusaders and pilgrims from the Holy Land. When it later developed into a surname in England it was therefore a patronymic surname, meaning 'son of Joseph' or a 'descendant of Joseph', and would have referred back to an ancestor with the given name Joseph.

Historically, it was not one of the most common names in Wales, but when it first appeared as a hereditary surname, between the 16th and 19th centuries, it was patronymic and referred back to the given name of an ancestor who lived during that time. The majority of Joseph entries on the Wales censuses of the mid-19th century were mostly evident in Glamorganshire, Carmarthenshire and Pembrokeshire, with fewer references in the other counties.

It also became prominent as a surname when Jewish families settled in Britain during the 19th century.

Tell us about any famous Joseph (or surname variant) you think we should add here. We will get our genealogists to check them out and add them to the list. Thanks!

Join the conversation with the Joseph tribe

Write an email address and click 'Invite' to share this page with more members of the Joseph tribe.

Discover where the Joseph Family members live around the world

Show off the Joseph Family Crest…