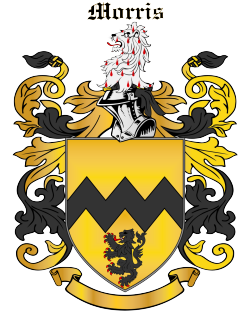 Design your own Morris Family Crest

This surname is found all over the British Isles, but it has more than one origin. In part, it stems from the Latin word "maurus" meaning moorish, or dark and swarthy. Variations of the surname include Maurice, Morse, Morice and Morriss, along with Morrison which of course means literally 'the son of Morris'.

It was a popular name in northern France, and was introduced to England by the Normans after the Conquest of 1066. It was first recorded in England in 1176 when Mauricius de Edligtona appears in the documents of the Danelaw, for the city of London.

In Wales, a Welsh version of the name – Meurig – became popular in medieval times, and was used as a personal name. It was later anglicised to Morris. It is believed that Meurig and the Welsh family name of Morris, rather than stemming from a Latin or Norman French root, instead generally derive from the Welsh words 'mawr' (meaning great) and 'rys' (a hero warrior or brave man). In Wales therefore it was originally a patronymic name, and it refers back to an ancestor who lived some centuries ago and had Meurig or Morris as a given name. It gradually became a settled, hereditary system in the country between the 16th and 19th centuries.

In Ireland, it relates to one of the Tribes of Galway and a family of Norman origin. In other cases it derives from the Norman name Fitzmaurice. Variations of the surname in Ireland include Morrissey and the Irish form Mac Muiris.

Highest concentrations of the surname appear in Wales and in the English counties which border Wales, namely Herefordshire, Shropshire and Gloucestershire. From those counties it has spread east and can be seen in the English Midlands.

Today, Morris is the 28th most popular surname in England and Wales, and there are over 22,000 Morrisons in Scotland. Morris remains a notable surname in terms of numbers in Wales, in particular in and around the capital city, where around one in about 215 families bears the surname. There are also significant clusters relating to the name in the English cities of Birmingham, Coventry and Liverpool. Elsewhere in the world, the Morris and Morrison surnames appear to be relatively common in Wellington, New Zealand (one in 435 families), Auckland, New Zealand (one in 442) and Vancouver (one in 485). But the United States is home to more people named Morris and Morrison than the entire population of Bristol – in combination, an estimated total of just under 478,000 – which is the US's 27th most popular surname.

Tell us about any famous Morris (or surname variant) you think we should add here. We will get our genealogists to check them out and add them to the list. Thanks!

Join the conversation with the Morris tribe

my great grandfather James morriss born county Mayo 1822/1827 does any one know anything about his parents . .James died in 1896 in Wallsend england he married Bridgete burns who was also from Ireland thanks for any help you can give.

Dennis Morris was born around 1710 in or about Galway. He departed Galway in 1732 (supposedly shortly after the English banned Catholic land ownership) and came to Baltimore, Maryland in North America, an open port for arriving Catholics. He proceeded north to New Jersey, married and started him family. He died in 1800 in New Jersey.

my aunt married a john morris in boston .he was from mayo .. a brother stayed in home place but john went to boston and married my aunt catherine egan they had children and grandchildren john died and left catherine with young family . she later married again and had one child . . would like to know if there are any connections in around mayo still . . my cosin j richard morris and i are in touch .he in boston and i in galway thanks margaret

John Morris was transported on a prison ship from England as was a couple other Morris. Research Morris family Austrailia. Back in the day England transported debtors and political to Australia. Most times to another prison. I am researching Morris family and have started a tree on Myheritage.com under Morris family. I have found so far that 3 lines came from England some wealthy some not. Famous authors royalty clear back to 1066 Normandy invasion of Briton. Those names Morris , Sharp and Shafto. Morris in Carolinas north Shaftos in New Jersey , Sharp in Connecticut, New Jersey, Iowa.

Hello out there! Trying to find info on John Morris who arrived in Australia in 1840 (from County Tyrone Ireland.. Donegal I think). He took up a large piece of land in the Junee NSW area and farmed sheep. His property was called Geralgambeth. As far as I'm aware, he was a free settler. I have a fair bit of info on his life after he arrived but none prior. Any snippets would be greatly appreciated. Regards

Looking for anyone that has connected the Morris family from Tennessee/Missouri area in United States to Ireland, oldest traceable relative at this moment is a Lige Morris born in Houston Tennessee, had one son named John Morris in Benton Tennessee on June 3rd 1872. John Morris died in Bruceton Tennessee on September 3rd 1938

The Morris name has a long history in Wales, but now DNA and some recorded history says their origin is from the Emerald Island. The Morris story [dominated by DNA tribal marker R1b-L513, Subgroup B2] can trace their origins to the Finn Valley in Donegal, Ireland from 50 BCE. Perhaps the journey begins with the Clanna Dedad; Deda, son of Sen or Deda Mac Sin. The Morris surname origin is from Clan Domnaill [DNA Tribe R1b-L513, Subgroup B1] and relations who remain in Ireland take the modern surname (O’)Donnelly, McDonald and Donohue in Ireland. The Domnaill name is also found in Brittany, France according to research from the Centre de Recherche Bretonne et Celtique. It is a very old name which appears in the 5th century Roman inscript

Areas of Origin for Morris

Write an email address and click 'Invite' to share this page with more members of the Morris tribe.

Discover where the Morris Family members live around the world

Show off the Morris Family Crest…