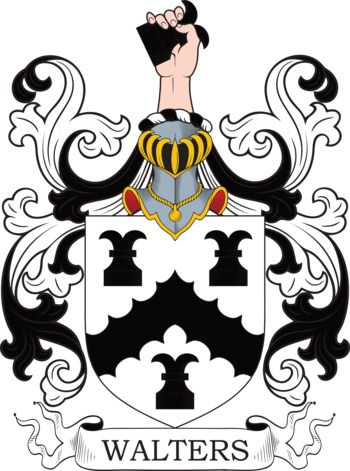 Design your own Walters Family Crest

Recorded as Walter, Walters, Waldar, Walder, Walther, and occassionally as Wolter or Wolters, this is an ancient Anglo-Saxon surname. It derives from the pre-7th century Old German personal name 'Waldhar', a compound of the elements 'wald', meaning rule, and 'hari', an army. There is also a Dutch variation of the name (Wolters) as well as Flemish forms (Wauters and Wouters).

The personal name was introduced into England during the reign of Edward the Confessor (1042 - 1077), and after the Norman Conquest of 1066 was widely adopted firstly as a Christian name and later a surname as well.

It was originally a patronymic surname, meaning 'son of Walter' or 'son of Wat' (Wat being a diminutive of Walter). It had developed into a hereditary surname in England by around 1400.

In Wales however it developed into a surname later than this, generally between the 16th and 19th centuries. The Welsh form of Walter as a personal name was 'Gwallter', but Walter and Walters are the forms used as a surname. It generally appears in mid and south Wales more often than in the north.

I'm having trouble tracing the origins of my father's family. The earliest ancestor I'm sure of is James Walters, who married Polly Roberts around 1850 in Eastern KY. I've been told 7 Walters brothers came to Kentucky from Pennsylvania through the Cumberland Gap, but that's family lore. I have a hunch they came to America from Wales, but I can't substantiate that. I'd appreciate any information anyone can give me.

Areas of Origin for Walters

Write an email address and click 'Invite' to share this page with more members of the Walters tribe.

Discover where the Walters Family members live around the world

Show off the Walters Family Crest…