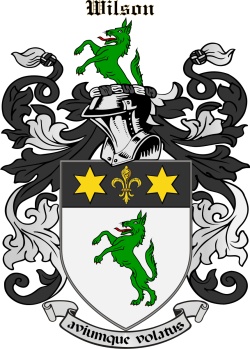 Design your own Willison Family Crest

This is an English patronymic name which means 'son of Will'. The root 'wil' is an Old Germanic word which originally meant 'desire for power or conquest'.

In Wales, the surname is far less widespread, but there are some references to it on early 17th century parish registers, mainly in areas close the English border, including parts of Montgomeryshire and Monmouthshire.

In 1881, the surname was widespread and particularly frequent in the southern English county of Kent with 2,692 occurrences. The most popular occupations recorded at the time for Wilson family members included farming, coal mining and labouring.

Tell us about any famous Willison (or surname variant) you think we should add here. We will get our genealogists to check them out and add them to the list. Thanks!

Join the conversation with the Willison tribe

I'm not Famous but my name is Mark Roland Wilson son to Roland George Wilson . I'm currently living in Harare Zimbabwe, but looking to immigrate to UK soon . I will be in England on 20th September 2021 and in Scotland on the 2nd October 2021. Returning back to Zimbabwe 7th October 2021

My name is Sally and I am looking for James Wilson. Actually the first Wilson in Ireland of our family came from Scotland about 1590 or so. I have a letter from a relative who says that in 1600 the Wilson in Ireland lost all three sons to drowning in the well on the farm in County Longford – just south of County Cavan. His first name is not known but the letter said that after those deaths, he moved north to County Cavan. Clearly the family remained in County Cavan for over 200 years. The earliest documented Wilson was John Wilson who was born about 1760 in County Cavan, Ireland. He had two sons - including William Wilson who was born in County Cavan, Ireland in 1790. He married Esther Coote (also from County Cavan) and they had 7 of their children born in Ireland. The nine of them then they made their way to Canada from Ireland – quite a trip. That was about 1840. (Their last child born in Ireland was born in October of 1839 and their next child was born in Ontario in 1843.) William and Esther settled in Cobourg, Ontario and then commenced to have 5 more kids – for a total of 12

My fourth great grandmother was Jane Wilson. She married William Greaves, who died at Waterloo. Their only child was, John, born 25 Dec 1801 in Enniskillen, Ireland.

Interested in learning more about my ancestry. My Grandfather was Van Vert Jordan Wilson born 1874. His parents migrated from Ireland during the potato famine.

My mother’s maiden name was Mary Elizabeth Wilson, from Cokeburg, Pa. She married my father, Frank Leslie Grimes Sr on October 25th 1958, in Washington County Pa. They had 5 children and resided in Pittsburgh Pa. Her father’s name was Howard Wilson and her her mother’s name was Ollie Amanda Rose. They lived in Washington Pa and had 6 children, I believe. However 3 of them passed away very young. Austin Wilson, 12 and Frances Wilson, 10. There was also an infant who passed but I’m not sure of the sex, name or age. They are all buried at Mt. Calvert cemetery in Scenery Hill Pa. Howard left my grandmother shortly after the last one passed. So I’ve been told and possibly started working on the railroads. I’m curious to see whether or not I hav

This was written by my father beginning with his Grandfather Alexander: Alexander Wilson was brought up somewhere in the parish of Redrock, Market Hill, Armagh and it would seem that he married sometime between 1840-50. He and his wife set up home in a small farm in the town land of Lisbane, Armagh (this farm is now owned by the Carmichael family). He also had a leather business and manufactured boots at the lower end of Thomas Street, Armagh. Alexander Wilson and his wife, Margaret, had six of a family, William, James, Alexander, Margaret, Eliza and Joseph. William emigrated to the Americas in his youth and was very little heard off. James carried on his fathers business and it would appear, was very successful He later owned the Mancheste

I am related to James he was my great, great, grand father WILSON "From History of Scott County, Iowa 1882 Chicago: Interstate Publishing Co." James Wilson, farmer and stock-raiser, Le Claire, Iowa, was born in Donegal, Ireland, in 1825, and came to the United States in 1855 and located in Le Claire Township, where he has followed farming since. In 1849 married Jane Galligher; she was born in Ireland. There was a family of 13 children, nine of whom are living, viz.: William, Susan, Nathaniel, Thomas, Sarah J., Andrew, John, Margaret and Mary E. Mrs. Wilson died in 1872. She was a member of Seceeders church. Mr. Wilson has 320 acres of land valued at $75 per acre in Le Claire Township, and 160 acres in Poweshick Co., Iowa, valued at $35.

Hello I am interested to connect with people who have ancestors who emigrated to York Ontario Canada in the early 1800's. Some names include William Wilson b. approx. 1795 his wife Sarah ( no maiden name b. 1795 - native of County Monaghan ) two sons aware of Hugh b. 1811 and Joseph b. 1816 ...Look forward to hearing from anyone with relatives in this area. Sincerely Diana dlraaf@yahoo.ca

My name is Ronald Boyd Wilson from maysville, kentucky born 3-12-1955, my father name was Walter Manley Wilson, his fathers name was Charles Wilson. They lived in Brown County and Adams County Ohio. They came from Maryland and Pennsylvania is what i am told. They settled in Brown County Ohio and were farmers.

(Part 1 of 3) The Wilson name has a long history in the British Isles and belongs to several tribal backgrouds, but now DNA and some recorded history says one origin is from the north-west region of the Emerald Island. This Wilson story [dominated by DNA tribal marker R1b-L513, Subgroup FA] can trace their beginnings to the Finn Valley in Donegal, Ireland from 50 BCE. Perhaps the journey begins with the Clanna Dedad; Deda, son of Sen or Deda Mac Sin. The Wilson surname origin is possibly from the Dáirine [R1b-L513] who found the Kingdom of Brycheiniog, Wales around 300 CE.

(Part 2 of 3) According to research, the Kingdom of Brycheiniog will take part in an invasion of Brittany, France around 500 CE. But how could this be? Recent discoveries from DNA testing are unlocking the migration patterns of Celtic tribes as late as 800 CE to 1200 CE. The Wilson story begins in pre-history Ireland but this descendant will then move to Wales where the family can be traced back to their Welsh tribe Cydifor Fawr. A relative and many of his kin will then travel to Brittany, France during the Dark Ages.

Areas of Origin for Willison

Write an email address and click 'Invite' to share this page with more members of the Willison tribe.

Discover where the Willison Family members live around the world

Show off the Willison Family Crest…