262,378 Spenser members around the world 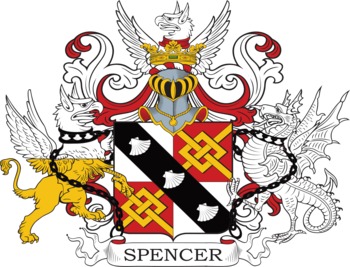 Design your own Spenser Family Crest

Recorded in several forms including Spence, Spencer, the rare patronymic Spencers, and the aphetic Spender, this is an English surname but one of French origins. It is perhaps surprisingly occupational and originally described a despencier or despendour, a man who was in charge of purchasing and distribution of all food and provisions within a royal or noble household or a monastery. This was a position of great importance, and usually only lesser in status to the Steward. The derivation is from the Old French pre 8th century word despense, meaning to weigh, and the word was probably introduced into England by the Norman French after the Conquest of 1066.

An English occupational name from Middle English spenser(e), spencer(e) meaning ‘household steward, butler, almoner’ deriving from Anglo-Norman French espenser or Old French despensier, for someone who dispensed provisions or money. Similarly, for Middle English spense ‘larder’, someone employed in the pantry of a great house or monastery.

There is some dispute about the origins of the Spencer family, some sources dispute that they are descended from William the Conqueror’s steward, Robert Despencer.

Robert Spencer (died 1627) was said to be the wealthiest man in England.

Joseph Spencer, an English convict was transported aboard the "Albion" on 29 May 1828, settling in New South Wales, Australia.

In 1891, the surname had a total of 29,200 occurrences in England and Wales and a further 291 in Scotland. In 1881, the surname was rarely occurring in the north and south of England. Although it was most prevalent in Lancashire and West Yorkshire, Nottinghamshire was also recorded as a top county with 1,302 occurrences.

In 1881, the most common Spencer occupation in the UK was Farmer. Farmer, Agricultural Labourer and Labourer were the top 3 reported jobs worked by Spencer. A less common occupation for the Spencer family was Coal Miner.

Diana Spencer (1961-1997), Princess of Wales, the first wife of Charles, the Prince of Wales. She was celebrated for her charity work to raise awareness and support those affected by mental illness, cancer and HIV/AIDS. She was also the president for the London children’s hospital - Great Ormond Street Hospital. Her eldest son, Prince William, Duke of Cambridge is the heir apparent of Elizabeth II.

Tell us about any famous Spenser (or surname variant) you think we should add here. We will get our genealogists to check them out and add them to the list. Thanks!

Join the conversation with the Spenser tribe

just found out about my spencer lineage. i love family history and hope to learn as much as i can. In the united states my closest spencer relative is callie marie spencer who is my great great grandmother. Her father is William Taylor Spencer. His father was brantley spencer. Brantley's father is Joseph charles Spencer (B:14 May 1812 Lee, Virginia, United States, D:1858 Wolfe, Kentucky, United States). That's as far back as i can get, but a relative who has done more research told me that william taylor was second cousins to diana spencer's father. Anyone want to help unravel ? Thanks-Eloise Stager

I live in Australia in the Northern Rivers area of New South Wales. My Spencer ancestor, John Spencer, was born in Tipperary around 1828 (I think...). I have links to cousins in the US and Canada, who report that their ancestor was one of a large family from Ireland who dispersed to our respective countries. John Spencer married in Ireland, but I’m not sure if his wife was Catherine McGrath (McKenna) or Catherine Grainger. I’m hoping to find a marriage registration to verify which one is the correct one. My paternal Great-Grandmother, Patience Ellen Spencer, daughter of John Spencer, was born in Australia. She was an incredibly strong woman and was still having a bet on horse-races on her 94th birthday. Is there any way I could find birth/marriage records for John Spencer from Tipperary. I am a member of Ancestry and have taken the DNA test, which is how I found my North American cousins, but it is difficult to find which record is accurate without going to the official source. I’m hoping this forum is the place to post a request for information. Please delete if not.

(Part 1 of 3) The Spencer name has a long history in the British Isles, but now DNA and some recorded history says one of its origins is from the north-west region of the Emerald Island. The Spencer story [dominated by DNA tribal marker R1b-L513, Subgroup D2] can trace their beginnings to the Finn Valley in Donegal, Ireland from 50 BCE. Perhaps the journey begins with the Clanna Dedad; Deda, son of Sen or Deda Mac Sin. The Spencer surname origin is from the Cenél Conaill [R1b-L513, Subgroup D] who found the Dál Fiatach.

(Part 2 of 3) A group will also found the Kingdom of Ercing in Wales as trade with Romans will become essential around 300 CE. But how could this be? Recent discoveries from DNA testing are unlocking the migration patterns of Celtic tribes as late as 800 CE to 1200 CE. The Spencer story begins in pre-history Ireland but this line and many of his kin will move to Wales, then travel to Brittany, France during the Dark Ages.

Areas of Origin for Spenser

Write an email address and click 'Invite' to share this page with more members of the Spenser tribe.

Discover where the Spenser Family members live around the world

Show off the Spenser Family Crest…