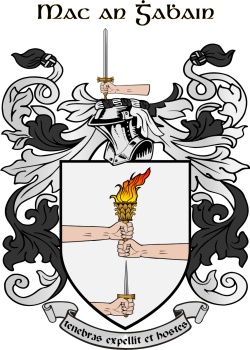 Design your own Smye Family Crest

There are approximately 4,296,003 Smith family members around the world. In general you can double this figure to include those related to the Smith names to allow for those connected to the name through maiden name connections.

It is an English and Scottish occupational name, and comes from the Middle English ‘smith’ (Old English smið), denoting a worker in metal, especially iron, such as a blacksmith or farrier. It may have derived from smitan ‘to strike, hammer’). During the medieval period, as well as making horseshoes, smiths would have forged swords, weapons and armour.

In Scotland and Ireland, it was sometimes written as per the Gaelic Mac Gobhann, Irish Mac Gabhann meaning ‘son of the smith’, similarly McGowan.

Also, an English locative or occupational name from Middle English smithe , smethe ‘smithy, forge’ (Old English smiððe, smeðe). It may be topographic, for someone who lived in or by a blacksmith’s shop, occupationally as a blacksmith or toponymic for someone from a place so named, such as Smeeth (Kent) or Smitha in King’s Nympton (Devon).

The English surname has absorbed Dutch Smith and German and Jewish (Ashkenazic) Schmidt, by assimilation and translation, cognates and equivalents including many other languages.

In Wales the earliest examples of the surname are generally confined to certain parts of the country, including parishes near to the border with England as well as some southern Pembrokeshire parishes and parts of Glamorganshire where the Anglo-Norman influence was most evident. Later migration during the 19th century into the industrial areas of Wales brought more Smith families into the country.

By 1881, the surname was widespread, especially in Kent where there were 14,641 Smith family members recorded on that year's census. It was also a common surname in Nottinghamshire with 7,627 occurrences, and in Gloucestershire where 2,034 Smiths lived in and around Bristol.

In 1881, most Smith men were recorded as being agricultural labourers, followed by general labourers and farmers, while many worked as coal miners.

SOME NOTABLE SMITHS FROM HISTORY

George Smith was English convict from Kent, who was transported aboard the ship 'Ann' in August 1809, settling in New South Wales, Australia.

The noted Charles Smith (1715-1756), was born in Waterford and Ireland's early topographer and county historian. His excellent county histories are a great source of information on 18th century Ireland.

Worthington George Smith (1835 – 1917) was an English cartoonist and illustrator, archaeologist, plant pathologist, and mycologist. His expertise was in fungi, which he collected, studied, and illustrated, writing over 200 articles and papers, as well as several books. His first major work in 1867 was to produce coloured illustrations of poisonous and edible fungi.

Marilynn Louise Smith (1929 – 2019) was an American professional golfer, who was one of the thirteen founders of the LPGA in 1950. She won two major championships and 21 LPGA Tour events in total. She was a member of the World Golf Hall of Fame.

Tell us about any famous Smye (or surname variant) you think we should add here. We will get our genealogists to check them out and add them to the list. Thanks!

Join the conversation with the Smye tribe

hai @Oakln6 i am trying to figure it out as well

According to the Book "History of Alabama and Her People" by Albert Burton Moore, my 4th Great Grandfather, James M. Smith had origins in Ireland. Unfortunately, the book never clearly states where from. He was born c. 1778, but isn't clear on the place. His first born, Daniel Ulysses Smith was born in Georgia,USA while all other children were born in Alabama, USA. Is anyone familiar with this family?

(Part 1 of 3) The Smith name has a long history in the British Isles, but now DNA and some recorded history says one of its origins is from the north-west region of the Emerald Island. The Smith’s of Cavan story [dominated by DNA tribal marker R1b-L513, Subgroup D2] can trace their beginnings to the Finn Valley in Donegal, Ireland from 50 BCE. Perhaps the journey begins with the Clanna Dedad; Deda, son of Sen or Deda Mac Sin. This Smith surname origin is from the Cenél Conaill [R1b-L513, Subgroup D] who found the Dál Fiatach.

(Part 2 of 3) A group will also found the Kingdom of Ercing in Wales as trade with Romans will become essential around 300 CE. But how could this be? Recent discoveries from DNA testing are unlocking the migration patterns of Celtic tribes as late as 800 CE to 1200 CE. The Smith story begins in pre-history Ireland but this line and many of his kin will move to Wales, then travel to Brittany, France during the Dark Ages.

My Smith came from the Londonderry area. Dr. Samuel Smith, William Smith and two sisters came to America in 1754. They sailed from Londonderry to Pennsylvania. Dr. John Smith and a Lawyer, Robert Smith stayed in Londonderry. I am looking for there family left in Ireland. Thanks

how does this work, i recently got passed down my coat of arms, and wanted to do a little research, I am a Smith living in America, i am Irish, any help would be appreciated..

Areas of Origin for Smye

Write an email address and click 'Invite' to share this page with more members of the Smye tribe.

Discover where the Smye Family members live around the world

Show off the Smye Family Crest…