924,519 Robinson members around the world 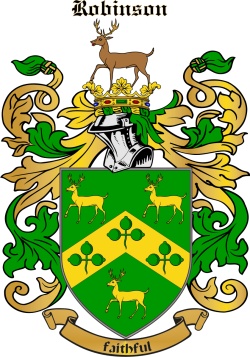 In Ireland, Robinson is only really common in Ulster. It is thought that the Robinsons of Glenarm may have originally been Robertsons. The two names had been used interchangeably in some areas of the province around the beginning of the 20th century. Robinson, the compound word, is a rare given name, while its derivative, Robin, has the distinction of being both a masculine and feminine given name.

Robinson (Variants: Robison, Robbinson, Robeson, Robinshaw) The son of Robin, or Robert. In Northern English: patronymic from the personal name Robin, a diminutive of the French name Robert, which was popular in Normandy. It originated from the Old German name of Rodbert, derived from ‘hroth’ which means ‘fame’ and ‘berht’ meaning ‘bright’. A representation of the surname would be a parental wish for the child’s ‘fame-bright’ future.

The earliest appearance of Robinson in the records is John Robynson who was listed in the Court Rolls of the Manor of Wakefied for 1324. Another early bearer of the surname was Katerina Robinson in 1540, IGI (Sutterton, Lincs). Also from the same county, Wolf Robinson, carver and gilder, 1893 in UK Jewish Directory (Boston, Lincs).

In 1891, the general population was widespread across England and Wales with 103,211 occurrences and a further 1,000 in Scotland. Lincolnshire was a top county with 3,965 occurrences and was a top surname in Anderby and Alkborough districts. Further south in the county of Kent there were 1,798 occurrences.

David Robinson OBE (1927-2017), A British journalist, author and teacher. He had a degree in Geography and an MSc in which he wrote a thesis on the coastal evolution of northeast Lincolnshire. David went on to become resident tutor of the University of Nottinghamshire for North Lincolnshire. He also served editorial roles with ‘Lincolnshire Life’ and ‘Natural World’ magazine. He was awarded an OBE for services to journalism and the community of Lincolnshire. In 2007 with a collection of papers on historical and geographical themes, titled “All Things Lincolnshire: An Anthology in Honour of David Robinson”.

Tell us about any famous Robinson (or surname variant) you think we should add here. We will get our genealogists to check them out and add them to the list. Thanks!

Join the conversation with the Robinson tribe

Hello members. I am trying to locate family members in Ireland, or at least figure out who they are. My paternal grandfather, William John Robinson, emigrated to Canada from Ireland in 1928. He was born to Irish parents in 1897 while they were visiting (?) in Scotland. He was raised in Ireland. As an adult he was apprenticing as a tailor and worked at his uncle's store in Fivemiletown. He worked as a tailor in Regina, SK, Cda until his retirement. He died in Regina in 1967. He came to Canada with 2 siblings (that I know of) Betty and Joe. I know he had other siblings in Ireland but I do not know their names or his parents names so it is proving very challenging to do any research into his family. If anyone has any leads I would be th

(Part 1 of 3) The Robinson name has a long history in the British Isles, but now DNA and some recorded history says its origin is from the south-west region of the Emerald Island. The Robinson story [dominated by DNA tribal marker R1b-L513, Subgroup O2] can trace their beginnings to what is now County Kerry from 50 BCE. Perhaps the journey begins with the Clanna Dedad; Deda, son of Sen or Deda Mac Sin. The Robinson surname origin is possibly a branch of what will become the Dáirine [R1b-L513] who are found in south Ireland around 300 CE.

(Part 2 of 3) According to research, the Dáirine will join with the Dál Riata of north-east Ireland and invade Scotland around 500 CE. But how could this be? Recent discoveries from DNA testing are unlocking the migration patterns of Celtic tribes as late as 800 CE to 1200 CE. The Robinson story begins in pre-history Ireland but many of his descendants will then move to Kintyre, Scotland where they and other R1b-L513 members will form the Dalriada. This line and many of his kin will then travel to Brittany, France during the Dark Ages.

Areas of Origin for Robinson

Write an email address and click 'Invite' to share this page with more members of the Robinson tribe.

Discover where the Robinson Family members live around the world

Show off the Robinson Family Crest…