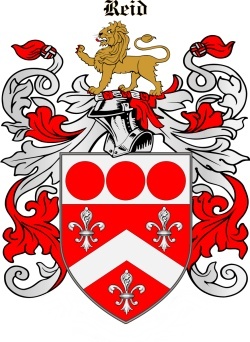 Design your own REED Family Crest

While the Reid surname is popular in Ireland it is acutally of Scottish descent from 700AD meaning "red".

The first mention of the nickname derivation appears before the Norman Conquest where Leofwine se Reade is mentioned in the records for 1016—20 in Kent.

There was an Old English word ‘ried’-‘a clearing’, giving rise to place names Read and Reed, from which some surnames would be derived. Other variants include English Read and Scottish Reid. Another possible origin for Reed could be from the occupational surnames Reader, Reeder, Readman, Reedman, and Redman- ‘reed-man, reed-cutter, thatcher’. In Middle English, the name would be given to someone with a ruddy complexion or red hair.

The motto or ‘war cry’ for Reed dating back as early as 14th century, translated to peace and plenty.

An example of the Reed surname, that is derived from a location, is the the valley of Redesdale and the River Rede that runs through it in Northumberland.

In 1891, the frequency in England and Wales for Reed was 24,505 with a few 1,558 occurrences in Scotland. In 1881, the surname was recorded as being one of the most frequent in the Plymouth area with 142 residing in the district. In the same year, it was reported that Agricultural Labourer, Farmer and Labourer were the top 3 reported jobs, with Agricultural Labourer being the most common occupation. A less common occupation for the Reed family was Coal Miner.

Walter Reed (1861—1902), American army physician conducted decisive experiments that proved typhoid germs are transmitted by the mosquito. His findings led to the elimination of yellow fever in Havana during the Spanish-American War, and later in Panama during the building of the Canal.

William Reed, a British convict from London was transported aboard the ‘Ann’, settling in New South Wales, Australia.

Hi! My name is Reed Wortman. I was named after my grandmother's maiden name. The earliest record I have of my Reed family is William Reed (b:1751). my g-g-g-g grandfather, in King's County Ireland, married to Mary Anglesey (b:abt 1755) also in King's County. His son Thomas (b:abt 1777) in Tipperary County emigrated to New York in 1810. In 1818, he and Joseph Graham travelled to York county Upper Canada and obtained a commitment of 5100 acres of land. In 1819 they conducted 51 families to Upper Canada and they settled in the Esquesing Twp, Peel County area.?

James Reed , my 6th great grandfather arrived in North America around 1728 , he had seven sons and two son-n-laws who a all fought for the colony’s during the revolutionary war. One of his sons, my 5th great grandfather John Lovett Reed also was fairly well known . During the war between the states in the US , my great great grandfather David Reed rode with Nathan Bedford Forrest in the 14th Tennessee cavalry CSA .

Areas of Origin for REED

Write an email address and click 'Invite' to share this page with more members of the REED tribe.

Discover where the REED Family members live around the world

Show off the REED Family Crest…