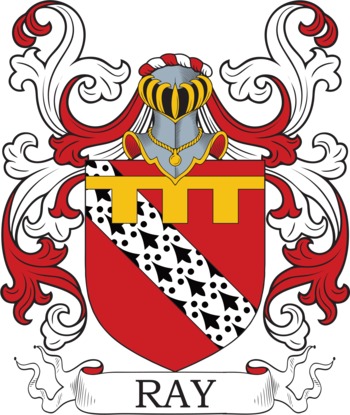 This is a surname with one of the most ancient origins. It derives from an Olde British word 'ea' pronounced 'ay' and describes someone who lived by a stream. More pragmatically it probably referred to somebody who lived on dry land by a stream, since before the days of land drainage to find 'dry land' was vital. It is true that some nameholders particularly those who originate in the Sussex - Kent region of England, may derive from the town of Rye, which means what it says - 'the place where corn was grown'.

An English nickname from Old French rei ‘king’, which was occasionally used as a personal name. It may also denote someone who behaved in a regal fashion or who had earned the title in some contest of skill or by presiding over festivities. From northern Middle English, rae (Old English 'roe') ‘roe deer’, it may perhaps denote a timid person or swift runner.

In French, from a noun derivative of Old French raier ‘to gush, stream, or pour’, hence a topographic name for someone who lived near a spring or rushing stream.

In Scotland, a reduced form of Scottish Gaelic Mac Raith and altered form of McRae.

A post-medieval spelling of Wray.

John Ray FRS (1627 – 1705) was an English naturalist widely regarded as one of the earliest of the English parson-naturalists. Until 1670, he wrote his name as John Wray. From then on, he used 'Ray', after "having ascertained that such had been the practice of his family before him". He published important works on botany, zoology, and natural theology.

In 1891, the surname was recorded in England and Wales with 20,409 occurrences and 779 in Scotland. In 1881, the surname was widespread especially in London, Lancashire and Staffordshire. It was also reported as a top surname in Bristol, located in the county of Gloucestershire.

In 1881, the most common Ray occupation in the UK was Labourer, along with Coal Miner and Farmer reported as the top 3 jobs worked by Ray. A less common occupation was Agricultural Labourer.

Edward Rivers John "Ted" Ray (1877 – 1943) was a British professional golfer, one of the leading players of the first quarter of the 20th century. He won two major championships, the Open Championship in 1912 and the U.S. Open in 1920. He was also captain of the British team in the inaugural Ryder Cup in 1927.

Tell us about any famous RAY (or surname variant) you think we should add here. We will get our genealogists to check them out and add them to the list. Thanks!

Join the conversation with the RAY tribe

Areas of Origin for RAY

Write an email address and click 'Invite' to share this page with more members of the RAY tribe.

Discover where the RAY Family members live around the world

Show off the RAY Family Crest…