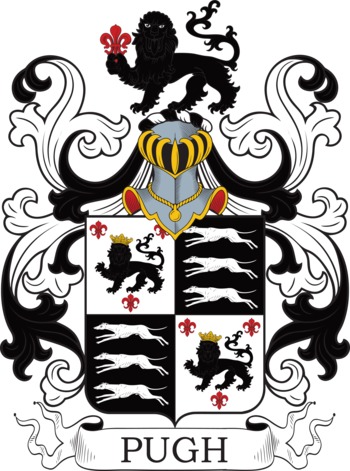 Design your own Pugh Family Crest

Pugh is one of the most popular of Welsh surnames, and its origin lies in the Welsh patronymic form, 'ap Hugh' or 'ap Huw', meaning 'the son of Hugh/Huw'.

Hereditary surnames did not become fixed and settled in Wales until between the 16th and 19th centuries, depending on where in the country the family lived and on the family's social status (the higher the social status the earlier a family's surname was fixed). Prior to that time, an individual's second name traditionally always referred back to an individual's father or, sometimes, grandfather. For example, a man named Dafydd whose father was called Huw would be known as 'Dafydd ap Huw'.

Over time, the phrase 'ap Hugh/Huw' was contracted to form the name 'Pugh'. For example, the name 'Dafydd ap Huw' would later evolve into 'Dafydd Puw', which was anglicised to David Pugh. 'Pugh' therefore refers back to a Welsh ancestor who generally would have lived some time between the 16th and 19th centuries, in a few cases slightly earlier than this.

Some Welsh families however dropped the 'ap'  and 'p' prefix, and instead opted to use 'Hughes' or, in some cases, 'Hugh' as hereditary surname.

The surname is found throughout Wales, with some of the earliest examples of the contracted form Pugh appearing in Montgomeryshire. By the mid-19th century the surname was evident in all the Welsh counties – for example, it was particularly popular in Merionethshire, although slightly less so on Anglesey and in neighbouring Caernarvonshire, where Hughes was the more popular variation of the surname. It was also seen in adjacent English counties of Cheshire, Shropshire, Herefordshire and Gloucestershire

SOURCES:
A Dictionary of English and Welsh Surnames (1896) by Charles Wareing Endell Bardsley

Tell us about any famous Pugh (or surname variant) you think we should add here. We will get our genealogists to check them out and add them to the list. Thanks!

Join the conversation with the Pugh tribe

Write an email address and click 'Invite' to share this page with more members of the Pugh tribe.

Discover where the Pugh Family members live around the world

Show off the Pugh Family Crest…