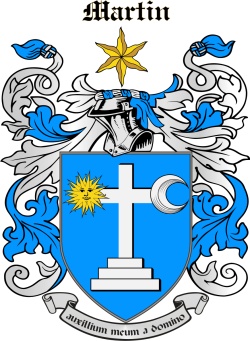 Design your own Martin Family Crest

The modern surname stems from the Old French and Middle English personal name Martin, and as such refers back to the name of an ancestor, 'the son of Martin'.

The name itself probably has two origins. The first being the medieval Latin Martinus, which in turn is a derivative of Mars (genitive form Martis), the Roman god of fertility and war, the roots of which may ultimately derive from 'mar' meaning ‘gleam’. The second origin theory relates to the Old English habitational name, ‘settlement by a lake’ (from mere/mær meaning ‘pool’ or ‘lake’ + tun ‘settlement’) or ‘settlement by a boundary’ (from (ge)mære meaning ‘boundary’ + tun ‘settlement’).

There are approximately 1,026,506 Martin family members around the world, or probably double this when maiden name connections and other relations are taken into consideration.

In 1881, the surname was most frequently observed in Middlesex, Surrey and Kent. There were 4,491 individuals recorded on that year's census in the southern county of Kent. The most common employment for Martin family members that year in the UK were agricultural labouring, general labouring and farming. Coal mining was less common.

Tell us about any famous Martin (or surname variant) you think we should add here. We will get our genealogists to check them out and add them to the list. Thanks!

Join the conversation with the Martin tribe

Laura Ann martin I stay right across the school st.martin north schools on lemoyne and my family name is martin of Orland Scottish and Welch and united kingdom I stay in Mississippi on lemoyne this is where I lived at the st.martin school on lemoyne Blvd. I I seen a begger at fountains piers under the bridge I then rushed home and put a a brand new church suit with brand-new church shoes in a plastic bedspread bag clear so it was neatly folded and I put it on my back and carried it to him with one hand on my bike I was 9 years old and I had no fear I rode my bike into the shadows under the bridge and I gave him a cloak a brand new church suit and shoes black and shinny so he had rags and walked away in a brand new suit this was my clack to him my coat of arms. I have my paper work stating our martin coat of arms.

I am looking for living descendants of Bernard Martin & Sarah, nee McGrath. Their son, Joseph married Sarah Frazer (or Frazier/Fraiser) in the Carnteel Catholic Parish, County Tyrone on 9 August 1843 (microfilm 1D/36) and emigrated from Liverpool 15 March1844 on the ship, Briton, to Sydney, New South Wales, Australia. Sarah's sister, Jane, also emigrated with them. Joseph's shipping record has his native place as Drumlane, County Cavan and he came as an agricultural labourer. Have done extensive genealogy searches for Bernard and Sarah for marriage and children but to no avail. Visiting Ireland October 2018; would be great to link with relatives. Jill - gormanjilly.6563@yahoo.com.au

Areas of Origin for Martin

Write an email address and click 'Invite' to share this page with more members of the Martin tribe.

Discover where the Martin Family members live around the world

Show off the Martin Family Crest…