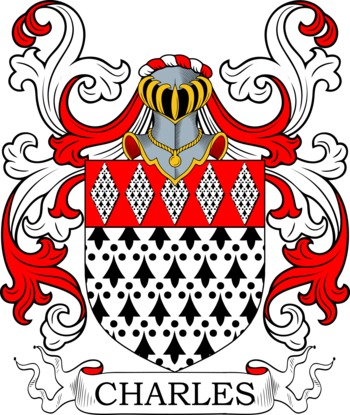 Design your own CHARLES Family Crest

The Charles surname is patronymic, meaning that is derives from the personal name of an ancestor.

The name itself has Germanic origins – 'Karl' or 'Carl', meaning 'man'. It later developed into the Latinised form of 'Carolus', and the Old French 'Charles', the form which became prominent in Britain after the Norman Conquest in 1066. It became particularly popular as a personal name during the reign of the Stuart kings in the 17th century.

In Wales fixed hereditary surnames first appeared between the 16th and 19th centuries, depending on where in the country families lived and on their social status. The surname Charles, in most cases (with some exceptions), would therefore refer back to an ancestor with the personal name Charles who lived during that period. Historically, during the 17th and 18th centuries, it was mostly prominent in counties adjacent to the English border, such as Montgomeryshire and Monmouthshire, only later becoming more evident in counties such as Carmarthenshire and Glamorgan as the 18th century progressed.

Areas of Origin for CHARLES

Write an email address and click 'Invite' to share this page with more members of the CHARLES tribe.

Discover where the CHARLES Family members live around the world

Show off the CHARLES Family Crest…